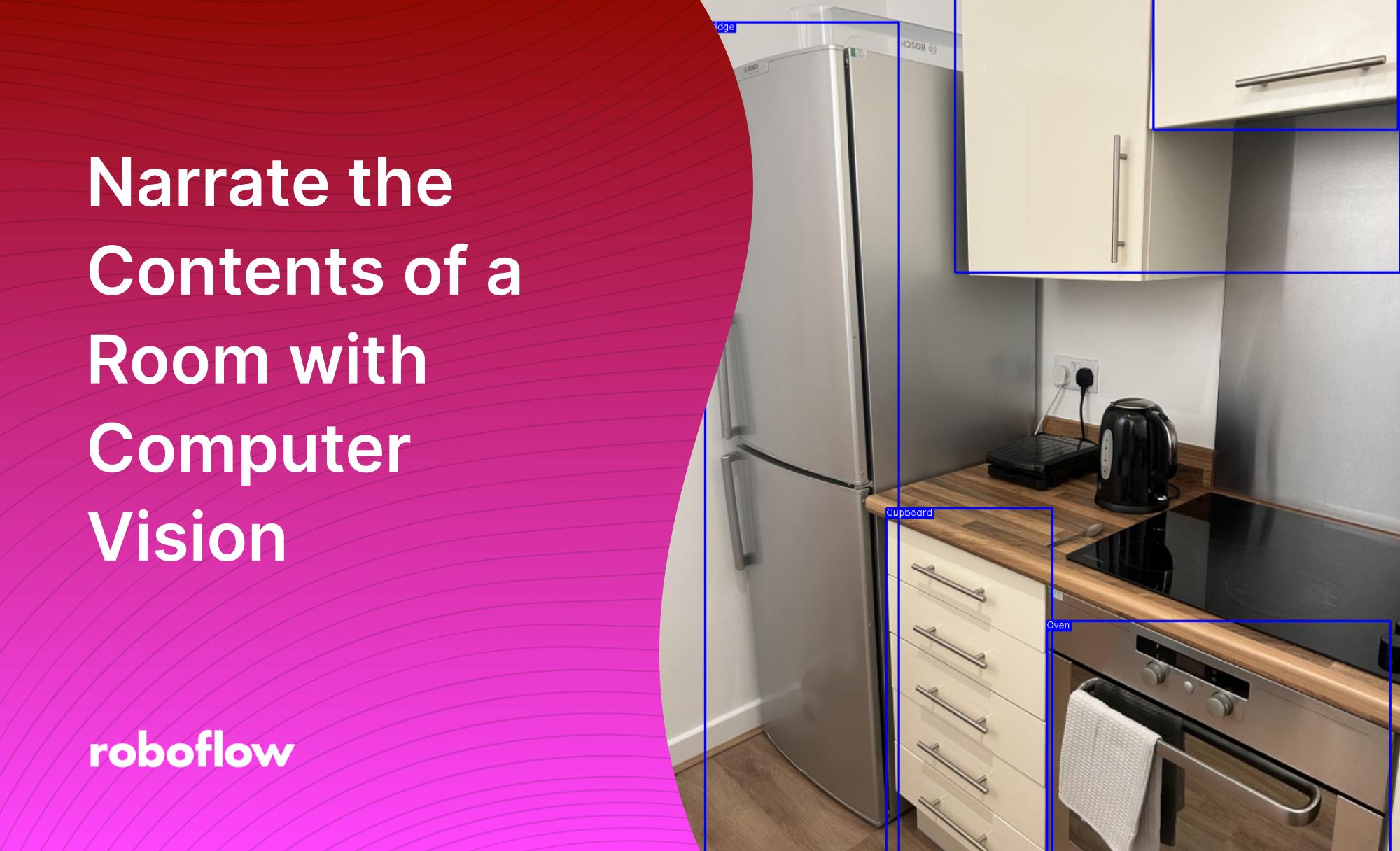 Computer vision has many applications in building accessibility technologies. With the ability to identify objects in an image or video – and their position in a captured frame –  you can build tools that help people navigate around an environment. In such applications, speech text to speech algorithms that narrate a given word or sentence are useful. You can have a model recognize objects in a room, then a speech synthesizer read out what is found.

In this guide, we’re going to walk through how to narrate the contents of a room with computer vision. We’ll use two pre-made models to get us started and build the logic to narrate predictions from the model. Let’s begin!

💡
The full source code associated with this project is available on GitHub.

Step 1: Choose Models to Use

We are going to build an application that:

To build this application, we’ll need to use two models. One model can identify the type of room in which a photo was taken, and another can identify specific objects in the room.

Luckily for us, there are already models that can help with both of these tasks. For this tutorial, we’re going to use MIT Indoor Scene Recognition, an image classification model that lets you identify the type of room in a photo. We’ll also use a model called “all_finalize” which identifies a few common household objects such as a cupboard and a refrigerator.

Versions of both of these models are hosted on Roboflow Universe, a repository of open models and datasets. To use these models, you will need a free Roboflow account.

The “all_finalize” model is a good starting point for identifying indoor objects, but you may want to build on the model to improve its ability to detect different objects, or to add new classes. You can do this by downloading the dataset associated with the model and adding your own annotated images.

Now that we have chosen models to use, we can start writing the logic for our code!

Step 2: Set Up the Application Script

First, we need to create our application script and write some code to configure our use of the Roboflow API and the text-to-speech library that we’re going to use in this project: pyttsx3.

Create a file called “app.py” and paste in the following code:

This code imports the libraries we’ll need for this project, creates a “workspace” object through which we will be able to query our Roboflow models, and configures the pyttsx3 library. The 150 value refers to the rate of speech used by the model. You can tweak this value as necessary.

You’ll need to keep a value in your environment called “ROBOFLOW_API_KEY” that stores your Roboflow API key. You can retrieve this value by following our API key guide.

Now that we have set up our script, we can begin writing the core logic for our application.

Let’s write code that narrates the type of room in which a photo was taken. First, we’re going to write a wrapper function that both narrates a string and prints that string to the console:

Next, we are going to write a function that uses the MIT Indoor Scene Recognition model on Roboflow to identify the type of room in which a photo was taken. This function will accept one parameter: the name of an image file on which to run inference. We’ll return a dictionary that contains all of the predictions returned by our model.

To test our function, we can call it and pass in the name of a file. In this case, we’re going to pass in a file called “kitchen1.jpeg”. The file looks like this:

Add this code to the bottom of your script:

This code will read out the type of room in which a photo was taken. The image above was taken in a kitchen. When our script runs, the word “kitchen” is narrated.

Now that we know the type of room that a photo was taken in, we can proceed on to narrate specific objects in the room.

Let’s test if this function works by writing a line of code that calls the function and prints all of the identified labels to the console:

We can open the “out.png” file to see the results of our model:

The all_finalize model has successfully identified a few objects in the room. We can now write a function that narrates the identified objects:

Let’s call this function and pass in the results from the code we wrote that identifies the room type and objects in a room:

Now, let’s run our code! When we run our program in full, we get the following results in our console:

Our program speaks out:

In this guide, we have written a Python script that uses two computer vision models to narrate the type of room in which a photo was taken and objects found in the room.

There are many things you can do to expand upon the code above. You could:

Now you have the tools you need to narrate predictions returned by a computer vision model. Happy building!