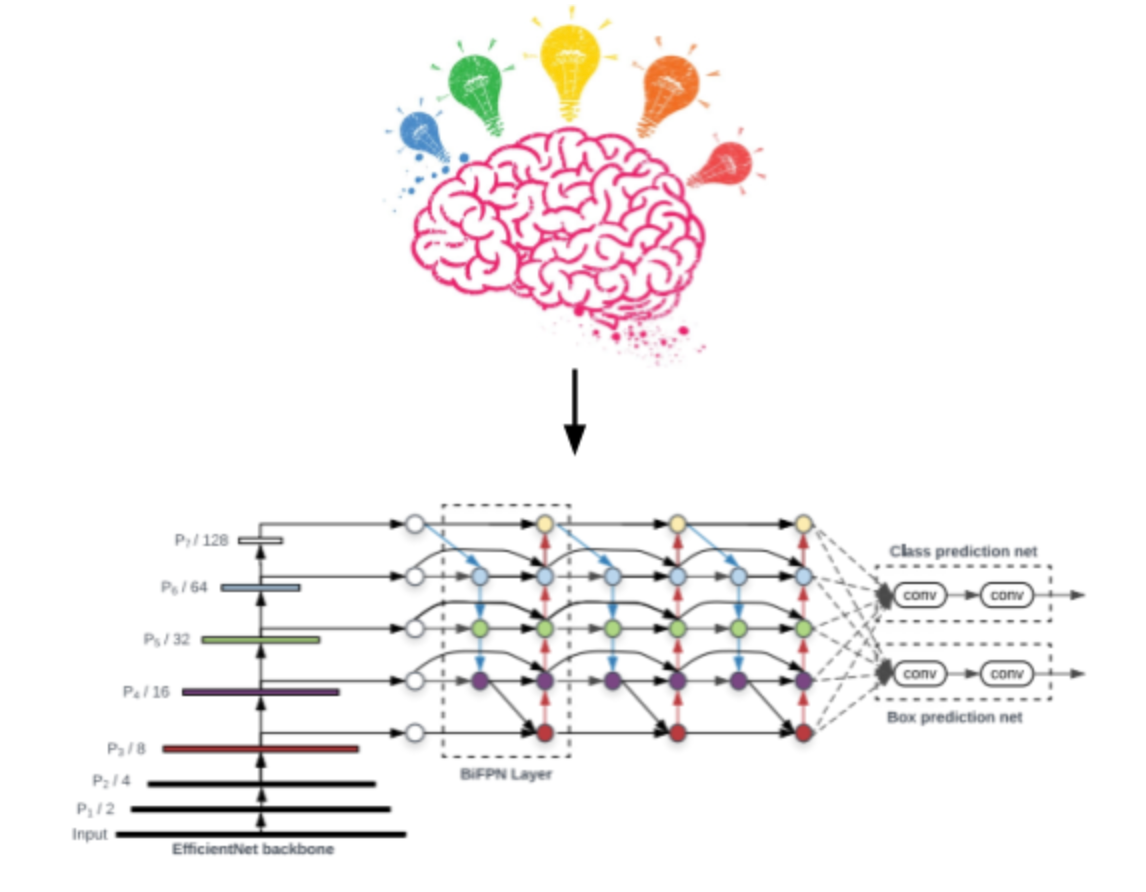 In this post, we do a deep dive into the neural magic of EfficientDet for object detection, focusing on the model's motivation, design, and architecture.

Recently, the Google Brain team published their EfficientDet model for object detection with the goal of crystallizing architecture decisions into a scalable framework that can be easily applied to other use cases in object detection.

In this blog post, we explore the rationale behind the decisions that were made in forming the final EfficientDet model, how EfficientDet works, and how EfficientDet compares to popular object detection models like YOLOv3, Faster R-CNN, and MobileNet.

Before exploring the model, here are some key areas that have prevented image detection systems from being deployed to real life use cases.

However, the exact manner in which the convolutional neural network (ConvNet) creates features has been a keen area of interest in the research community for sometime. ConvNet releases have included ResNet, NASNet, YoloV3, Inception, DenseNet, … and each has sought to increase image detection performance by scaling ConvNet model size and tweaking the ConvNet design. These ConvNet models are provided in a scaling fashion, so programmers can deploy a larger model to improve performance if their resources allow.

You can make each layer wider, you can make the number of layers deeper, you can input images at a higher resolution, or you can make a combination of these improvements. As you can imagine, the exploration of all these possibilities can be quite tedious for machine learning researchers.

EfficientNet set out to define an automatic procedure for scaling ConvNet model architectures. The paper seeks to optimize downstream performance given free range over depth, width, and resolution while staying within the constraints of target memory and target FLOPs. They find that their scaling methodology improves the optimization of previous ConvNets as well as their EfficientNet architecture.

The new family of EfficientNet networks is evaluated on the ImageNet leaderboard, which is an image classification task. Note: there have been some improvements since the original release of EfficientNet, including tweaks to optimize from the resolution discrepancy and deploying EfficientNet as a teacher and student.

The EfficientNet looks like a good backbone to build upon. It efficiently scales with model size and outperforms other ConvNet backbones.

So far, we have covered the following portion of the EfficientDet network:

Now, we will move onto the contributions of EfficientDet, which seeks to answer the following question: how exactly should we combine the features of ConvNets for object detection? And how should we scale our model’s architecture once we have developed this combination process?

Feature fusion seeks to combine representations of a given image at different resolutions. Typically, the fusion uses the last few feature layers from the ConvNet, but the exact neural architecture may vary.

In the above image, FPN is a baseline way to fuse features with a top down flow. PA net allows the feature fusion to flow backwards and forwards from smaller to larger resolution. NAS-FPN is a feature fusion technique that was discovered through neural architecture search, and it certainly does not look like the first design one might think of.

The EfficientDet paper uses “intuition” (and presumably many, many development sets) to edit the structure of NAS-FPN to settle on the BiFPN, a bidirectional feature pyramid network. The EfficientDet model stacks these BiFPN blocks on top of each other. The number of blocks varies in the model scaling procedure. Additionally, the authors hypothesize that certain features and feature channels might vary in the amount that they contribute to the end prediction, so they add a set of weights at the beginning of the channel that are learnable.

Previous work on model scaling for image detection generally scaled portions of the network independently. For example, ResNet scales only the size of the backbone network. But a joint scaling function had not yet been explored. This approach is very reminiscent of the joint scaling work done to create EfficientNet.

The EfficientDet Model is evaluated on the COCO (Common Objects in Context) data set, which contains roughly 170 image classes and annotations across 100,000 images. COCO is considered to be the general purpose challenge for object detection. If the model performs well in this general domain, it will likely do very well on more specific tasks. EfficientDet outperforms previous object detection models under a number of constraints. Below, we look at the performance of the model as a function of FLOPS.

Here we can see that the model does quite well relative to other model families under similar constraints. The authors also evaluate the model on semantic segmentation on Pascal VOC. They find that they achieve state of the art there too. Hey, why not?

Simply, Why is EfficientDet Useful?

Taking a step back from the implementation details, it is pretty incredible to think about what the open sourced checkpoints of EfficientDet mean for computer vision engineers. The pretrained checkpoints of EfficientNet crystallize all of the findings and automaticity that the researchers at Google Brain placed into building a ConvNet, along with all of the supervision that image classification on ImageNet can provide.

The EfficientNet checkpoints are further leveraged with feature fusion and all components of the architecture are efficiently scaled. Finally, these model weights are pretrained on COCO, a generalized image detection dataset. As a user, there are few decisions left up to question beyond the type of data to provide the model.

Nice Breakdown - How Do I Use EfficientDet?

At Roboflow, we have provided a tutorial on this blog post on how to train EfficientDet and this Colab Notebook on how to train EfficientDet. Through Roboflow, you can feed in your data set with annotations and simply feed a new data download link into our example and get some results. Then, after training, the notebook exports the trained weights for deployment to an application!

If you have results with EfficientDet and want to share, submit your project.