How to Train YOLOv8 Object Detection on a Custom Dataset 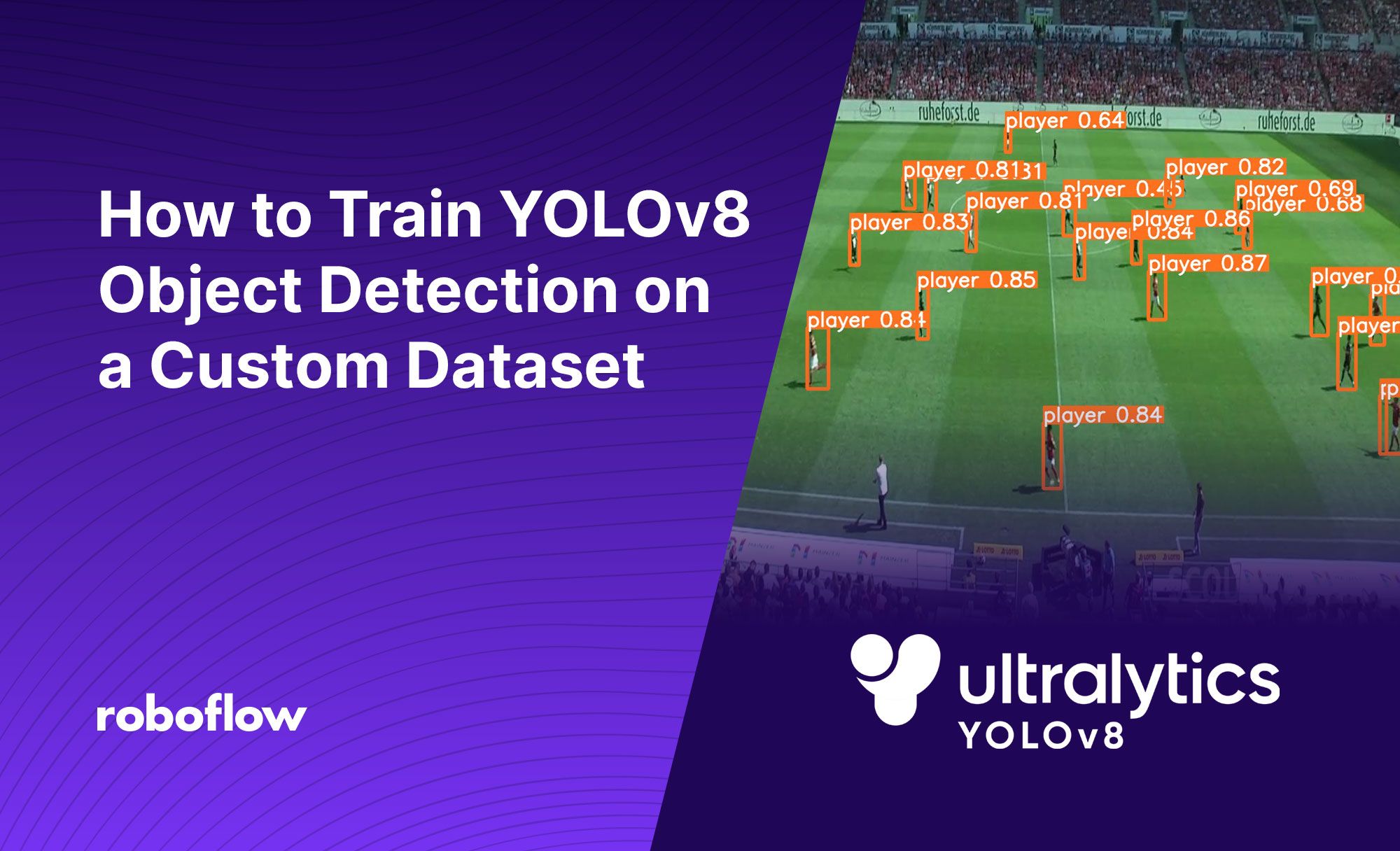 💡
We open-sourced all the Python code used in this tutorial. You can find it in our Roboflow Notebooks repository. Open up the notebook and follow along.

YOLOv8 is the latest installment in the highly influential family of models that use the YOLO (You Only Look Once) architecture. YOLOv8 was developed by Ultralytics, a team known for its work on YOLOv3 and YOLOv5.

Following the trend set by  YOLOv6 and YOLOv7, we have at our disposal object detection, but also instance segmentation, and image classification. The model itself is created in PyTorch and runs on both the CPU and GPU. As with YOLOv5, we also have a number of various exports such as TF.js or CoreML.

For a deep dive into the YOLOv8 architecture, see our What's New in YOLOv8 post.

We are still waiting for the Papers with Code benchmark comparing YOLOv8 with the other SOTA real-time models. In the meantime, we matched v8 against YOLOv5 using the RF100 dataset. YOLOv8 scores higher 64% of the time, and when it performs worse, the difference is negligible.

In this tutorial, we will take you through each step of training the YOLOv8 object detection model on a custom dataset. You will learn how to use the new API, how to prepare the dataset, and most importantly how to train and validate the model. Let's begin!

How to Install YOLOv8

YOLOv8 can be installed in two ways :  from the source and via pip. This is because it is the first iteration of YOLO to have an official package.

To install YOLOv8 from pip, use the following command:

You can install the model from the source on GitHub using these commands:

The developers of YOLOv8 decided to break away from the standard YOLO project design : separate train.py, detect.py, val.py, and export.py scripts. In the short term it will probably cause some confusion while in the long term, it is a fantastic decision!

This pattern has been around since YOLOv3, and every YOLO iteration has replicated it. It was relatively simple to understand but notoriously challenging to deploy especially in real-time processing and tracking scenarios.

The new approach is much more flexible because it allows YOLOv8 to be used independently through the terminal, as well as being part of a complex computer vision application.

YOLOv8 comes with a command line interface that lets you train, validate or infer models on various tasks and versions. The CLI requires no customization or code. You can run all tasks from the terminal. Usage is fairly similar to the scripts we are familiar with. The example below shows how to leverage the CLI to detect objects in a given image.

Ultralytics YOLO comes with a pythonic Model and Trainer interface. This finally allows us to use the YOLO model inside a custom Python script in only a few lines of code. Something like this has been impossible until now without doing a repository fork and making your own changes to the code.

Preparing a custom dataset for YOLOv8

Building a custom dataset can be a painful process. It might take dozens or even hundreds of hours to collect images, label them, and export them in the proper format. Fortunately, Roboflow makes this process straightforward. Let me show you how!

Before you start, you need to create a Roboflow account. Once you do that, you can create a new project in the Roboflow dashboard. Keep in mind to choose the right project type. In this case choose, "Object Detection".

Next, add data to your newly created project. You can do it via API or through our web interface. If you don’t have a dataset, you can grab one from Roboflow Universe or use the football-players-detection dataset which we will be showing later in this tutorial.

If you drag and drop a directory with a dataset in a supported format, the Roboflow dashboard will automatically read the images and annotations together.

If you only have images, you can label them in Roboflow Annotate. When starting from scratch, consider annotating large batches of images via API or use the model-assisted labeling tool to speed things up.

Generate a new version of your dataset

Now that we have our images and annotations added, we can Generate a Dataset Version. When Generating a Version, you may elect to add preprocessing and augmentations. This step is entirely optional, however, it can allow you to improve the robustness of your model significantly.

Once the dataset version is generated, we have a hosted dataset we can load directly into our notebook for easy training.

One way to download a dataset from Roboflow Universe is to use our pip package. You can generate the appropriate code snippet directly in our UI. On a dataset’s Universe home page, click the Download this Dataset button and select YOLO v5 PyTorch export format.

After a few seconds, you will see a code similar to the one below, except with all the necessary parameters filled in. You can copy and paste it into your Jupyter Notebook or a similar environment. When you execute it, the dataset will be downloaded to your machine in the appropriate format. Magic!

Train YOLOv8 on a custom dataset

After pasting the dataset download snippet into your YOLOv8 Colab notebook, you are ready to begin the training process. You can do so using this command:

Your model will begin training and run for several minutes, or hours, depending on how big the dataset is and which training options you chose.

Here are the results of training a player detection model with YOLOv8:

Validate with a new model

When the training is over, it is good practice to validate the new model on images it has not seen before. Therefore, when creating a dataset, we divide it into three parts, and one of them that we will use now as a test dataset.

Predict with a custom model

To predict data using a custom model, use the following command:

Once you have finished training your YOLOv8 model, you’ll have a set of trained weights ready for use with a hosted API endpoint. These weights will be in the “/runs/detect/train/weights/best.pt” folder of your project. You can upload your model weights to Roboflow Deploy with the deploy() function in the Roboflow pip package to use your trained weights.

To upload model weights, add the following code to the “Inference with Custom Model” section in the notebook:

Replace the DATASET_VERSION value with the version number associated with your project. If you downloaded your weights from Roboflow using the code snippet provided earlier, the “DATASET_VERSION” number is stored in the “dataset.version” value.

When you run the code above, you’ll see a green checkmark appear next to the version for which you have uploaded weights. You will also see a label that says you uploaded your weights using the YOLOv8 weight upload feature:

Click on "Deploy" in the sidebar of the Roboflow dashboard to see the deployment options available to you. Directly in the browser, you can test your model and share the model with others by sending them the URL.

You'll be able to test and show model performance by uploading an image or video:

and by using your webcam, or by pasting in a YouTube link to a video on which you want to run inference.

YOLOv8 is the latest release in the family of YOLO models, defining a new state-of-the-art in object detection. When benchmarked on Roboflow 100, we saw a significant performance boost between v8 and v5.

The YOLOv8 software is designed to be as intuitive as possible for developers to use. With a new Ultralytics YOLOv8 pip package, using the model in your code has never been easier. There is also a new command line interface that makes training more intuitive, too.

Now you have all you need to start building using Roboflow 100. Happy training!