What is Zero Shot Learning in Computer Vision? 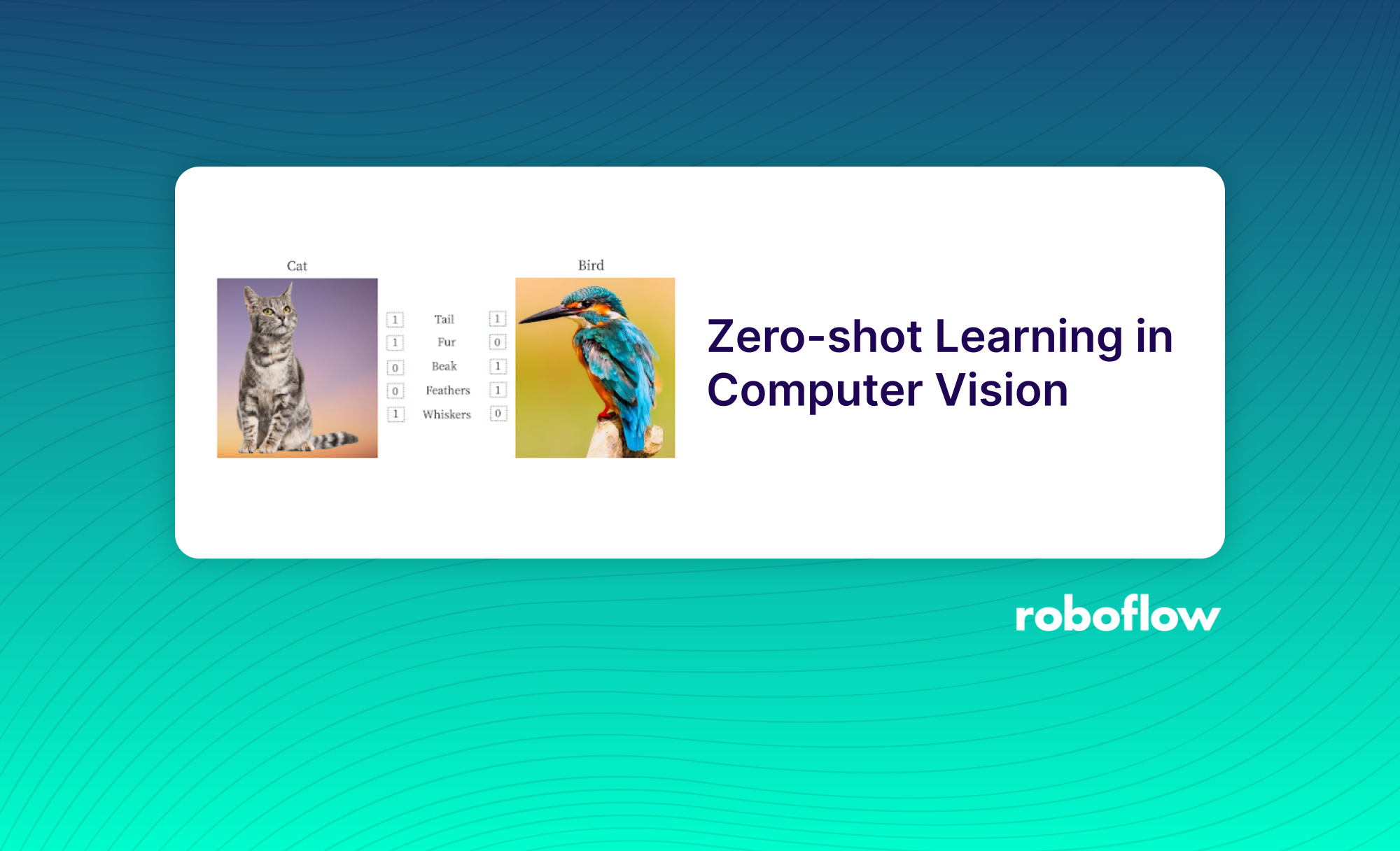 Consider the case of recognizing a category of an object in images without ever having seen a photo of that type of object. You might be able to determine what a cat is in an image the first time you see it if you have read a comprehensive description of it.

Modern computer vision algorithms applies this principle in a technique called "zero-shot learning". Zero-shot learning lets a model complete a task without having received any training examples by using auxiliary information – for example, text descriptions – to infer what might be in an image.

In this article, we are going to discuss:

What is Zero-Shot Learning?

Zero-Shot Learning (ZSL) is a machine learning technique that allows a model to classify objects from previously unseen classes, without receiving any specific training for those classes. This technique is useful for autonomous systems that need to be able to identify and categorize new objects on their own.

One pioneering example of zero-shot learning in computer vision is CLIP, an image classifier built by OpenAI. We discuss this technology in more depth in the following video, if you are curious:

Why is Zero-Shot Learning Useful?

Zero-Shot Learning is useful because it can help to overcome the challenges and costs associated with data labeling, an time-consuming and often expensive process. It is especially difficult to obtain annotations from specialized experts in certain fields, such as biomedical data, which requires the expertise of trained medical professionals.

Additionally, there may not be enough training data available for a class (i.e. in the case of trying to label rare defects in products), or the data may be imbalanced. These two scenarios make it difficult for a model to accurately reflect real-world scenarios. Furthermore, unsupervised learning methods may also be insufficient in some tasks such as classifying different sub-categories of the same object (for example, breeds of a dog).

ZSL can help to alleviate these problems by allowing a model to perform classification on novel classes (unseen classes) using the knowledge it has already learned during training.

ZSL has a range of applications, including image classification, object detection, object tracking, semantic segmentation, style transfer and natural language processing. It is particularly useful in scenarios where labeled data for novel classes is scarce or expensive to obtain.

How does Zero-Shot Learning Work?

In Zero-Shot Learning, data is divided into three categories:

Zero-Shot Learning is a two-step process that involves training and inference. During training, a model learns about a labeled set of data samples. During inference, the model uses this knowledge and auxiliary information to classify a new set of classes.

Humans are able to perform "Zero-Shot Learning" because of their existing language knowledge base. We can make connections between new or unseen classes and previously seen visual concepts. Like humans, Zero-Shot Learning relies on existing knowledge.

In the case of computer vision, "knowledge" is a labeled training set of seen and unseen classes. The data provided should be related in a high-dimensional vector space called a semantic space. The knowledge from the seen classes can be transferred to the unseen classes in this space.

The two most common approaches used to solve the zero-shot recognition problems are:

Let us discuss them in more detail.

Classifier-based methods for training a multi-class zero-shot classifier typically involve using a one-versus-rest approach, where a separate binary classifier is trained for each unseen class. Depending on the specific approach used to construct the classifiers, these methods can be further divided into three subcategories:

These methods aim to build a classifier for unseen classes by establishing a connection between the binary one-versus-rest classifier for each class and its corresponding class prototype in a semantic space.

Relationship methods for constructing a classifier for unseen classes focus on the relationships between and within those classes. In the feature space, binary one-versus-rest classifiers for the seen classes can be trained using available data.

The methods belonging to this category involve constructing a classifier for unseen classes by combining classifiers for the basic elements that make up those classes.

In this approach, it is assumed that there is a list of basic elements that can be used to form the classes. It is also assumed that each data point in the seen and unseen classes is a combination of these elements. For example, an image of a dog might have elements such as a tail and fur.

In the semantic space, each dimension is associated with a basic element. Each class prototype represents the combination of these elements for the corresponding class. The class prototypes can take on a value of 1 or 0 for each dimension, indicating whether the class has the corresponding element. These methods are particularly well-suited for use in semantic spaces.

Both the feature and semantic spaces are represented as real number spaces, with instances and prototypes represented as vectors. In this view, the prototypes can be considered labeled instances as well. Projection methods involve projecting instances from these two spaces into a common space, which allows for obtaining labeled examples of the unseen classes.

Instance-borrowing methods involve obtaining labeled examples of the unseen classes by borrowing from the training instances. These methods rely on similarities between classes. For example, if we want to build a classifier for the "truck" class but don't have any labeled examples of trucks, we might use labeled examples of the "car" and "bus" classes as positive instances when training the classifier for "truck." This is similar to how humans recognize objects and learn about the world by recognizing similar objects. We might not have seen instances of certain classes, but we can still recognize them based on our knowledge of similar classes.

To evaluate the performance of a classifier in zero-shot recognition, we calculate the average per category top-k accuracy. This metric measures the proportion of test samples whose actual class (label) is among the k classes with the highest predicted probabilities by the classifier.

In Zero-Shot Learning, the main goal is to adapt a pre-trained model to classify samples from novel classes when data from these classes becomes available. For example, a model trained to recognize dogs and cats using supervised learning could be adapted to classify birds on the fly using Zero-Shot Learning.

One common challenge in this context is the "domain shift" problem, which occurs when the distribution of data in the training set (seen classes) and the testing set (which may include samples from both seen and unseen classes) is significantly different.

Zero-shot learning is thus unsuitable for trying to make predictions on images that are far from the domain on which the model was trained.

Zero-Shot Learning often faces the challenge of the "hubness" problem, which occurs due to the curse of dimensionality in the nearest neighbor search of high-dimensional data. Points called "hubs" tend to frequently appear in the k-nearest neighbor set of other points.

In Zero-Shot Learning, the hubness problem arises for two reasons:

Zero-Shot Learning is a machine learning technique that enables a pre-trained model to classify samples from classes that were not present in the training data.