Using Your GPU in a Docker Container 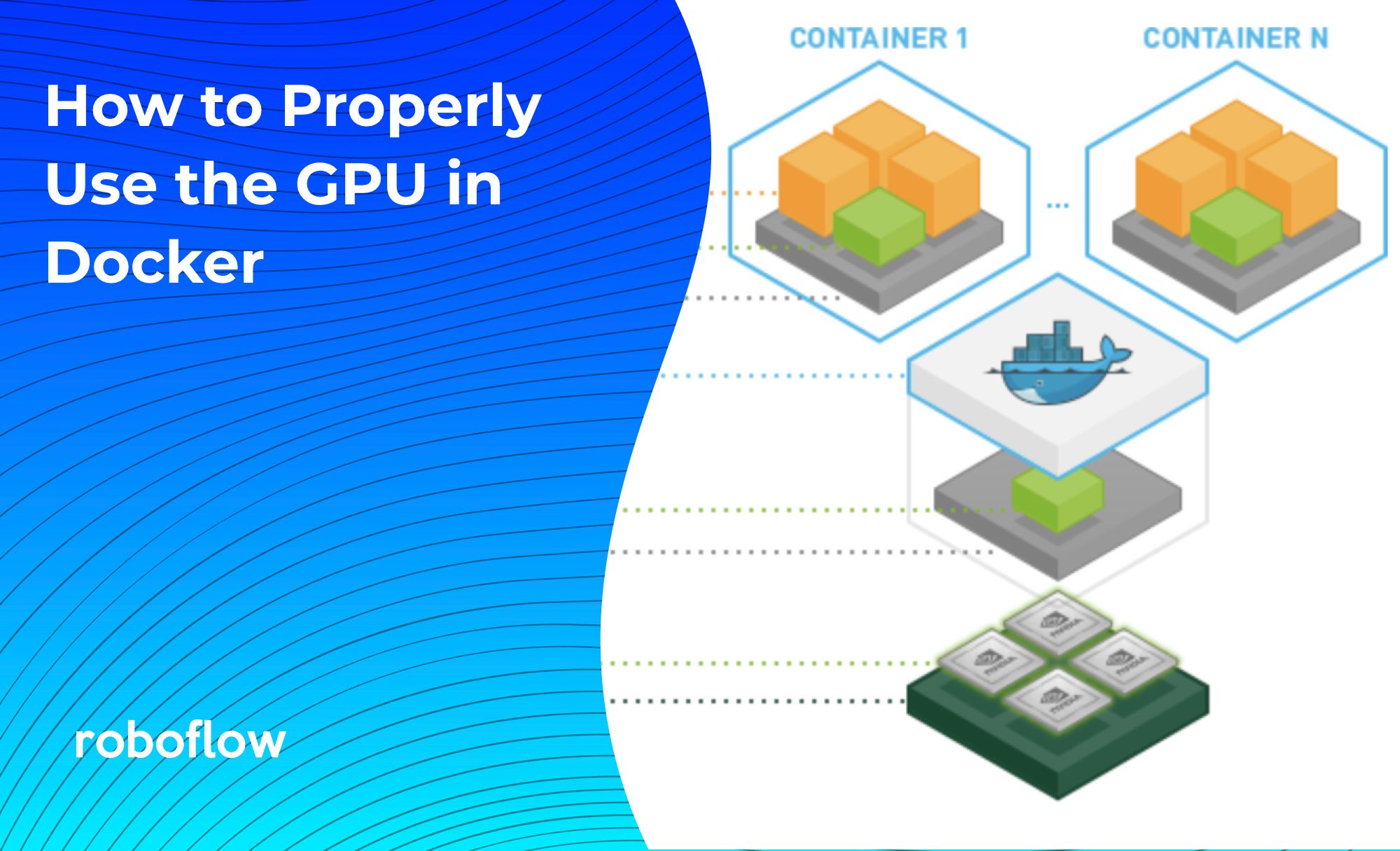 Configuring the GPU on your machine can be immensely difficult. The configuration steps change based on your machine's operating system and the kind of NVIDIA GPU that your machine has. To add another layer of difficulty, when Docker starts a container - it starts from almost scratch.

Certain things like the CPU drivers are pre-configured for you, but the GPU is not configured when you run a docker container. Luckily, you have found the solution explained here. It is called the NVIDIA Container Toolkit.

In this post, we walk through the steps required to access your machine's GPU within a Docker container. Roboflow uses this method to let you easily deploy to NVIDIA Jetson devices.

When you attempt to run your container that needs the GPU in Docker, you might receive any of the errors listed below. These errors are indicative of an issue where Docker and Docker compose is unable to connect to your GPU.

Here are a few of the errors you may encounter:

Enabling Docker to Use Your GPU

If you have encountered any errors that look like the above ones listed above, the steps below will get you past them. Let's talk through what you need to do to allow Docker to use your GPU step-by-step.

Install NVIDIA GPU Drivers on your Base Machine

First, you must install NVIDIA GPU drivers on your base machine before you can utilize your GPU in Docker.

As previously mentioned, this can be difficult given the plethora of distribution of operating systems, NVIDIA GPUs, and NVIDIA GPU drivers. The exact commands you will run will vary based on these parameters.

If you're using the NVIDIA TAO Toolkit, we have a guide on how to build and deploy a custom model.

The resources below may be useful in helping your configure the GPU on your computer:

Once you have worked through those steps, run the the nvidia-smi command. If the command lists information about your GPU, you know that your GPU has been successfully identified and recognised by your computer. You may see an output that looks like this:

Now that we know the NVIDIA GPU drivers are installed on the base machine, we can move one layer deeper to the Docker container. See Roboflow's Docker repository for examples of how Docker containers are used to deploy computer vision models.

In that Dockerfile we have imported the NVIDIA Container Toolkit image for 10.2 drivers and then we have specified a command to run when we run the container to check for the drivers. You might want to update the base image version (in this case, 10.2) as new versions come out.

Now we build the image with the following command:

Now, we can run the container from the image by using this command:

Keep in mind, we need the --gpus all flag or else the GPU will not be exposed to the running container.

From this state, you can develop your app. In our example case, we use the NVIDIA Container Toolkit to power experimental deep learning frameworks. The layout of a fully built Dockerfile might look something like the following (where /app/ contains all of the python files):

The above Docker container trains and evaluates a deep learning model based on specifications using the base machines GPU.

In order to get Docker to recognize the GPU, we need to make it aware of the GPU drivers. We do this in the image creation process. This is when we run a series of commands to configure the environment in which our Docker container will run.

The "brute force approach" to ensure Docker can recognise your GPU drivers is to include the same commands that you used to configure the GPU on your base machine. When docker builds the image, these commands will run and install the GPU drivers on your image and all should be well.

There are downsides to the brute force approach. Every time you rebuild the docker image, you will have to reinstall the image. This will slow down your development speed.

In addition, if you decide to lift the Docker image off of the current machine and onto a new one that has a different GPU, operating system, or you would like new drivers - you will have to re-code this step every time for each machine.

This kind of defeats the purpose of build a Docker image. Also, you might not remember the commands to install the drivers on your local machine, and there you are back at configuring the GPU again inside of Docker.

The brute force approach will look something like this in your Dockerfile:

This approach requires you to have your NVIDIA drivers in a local folder. You can replace the "./Downloads" folder in the example above with the directory where you have saved your GPU drivers.

What if I need a different base image in my Dockerfile?

Let's say you have been relying on a different base image in your Dockerfile. Then, you should consider using the NVIDIA Container Toolkit alongside the base image that you currently have by using Docker multi-stage builds.

Now that you have you written your image to pass through the base machine's GPU drivers, you will be able to lift the image off the current machine and deploy it to containers running on any instance that you desire.

Alternative to Train and Deploy Models

Roboflow Train handles the training and deployment of your computer vision models for you.

Next Steps After Exposing GPU Drivers

Now you know how to expose GPU Drivers to your running Docker container using the NVIDIA Container Toolkit. You should be able to use your GPU drivers and run Docker compose without running into any issues.