How to Train YOLOR on a Custom Dataset 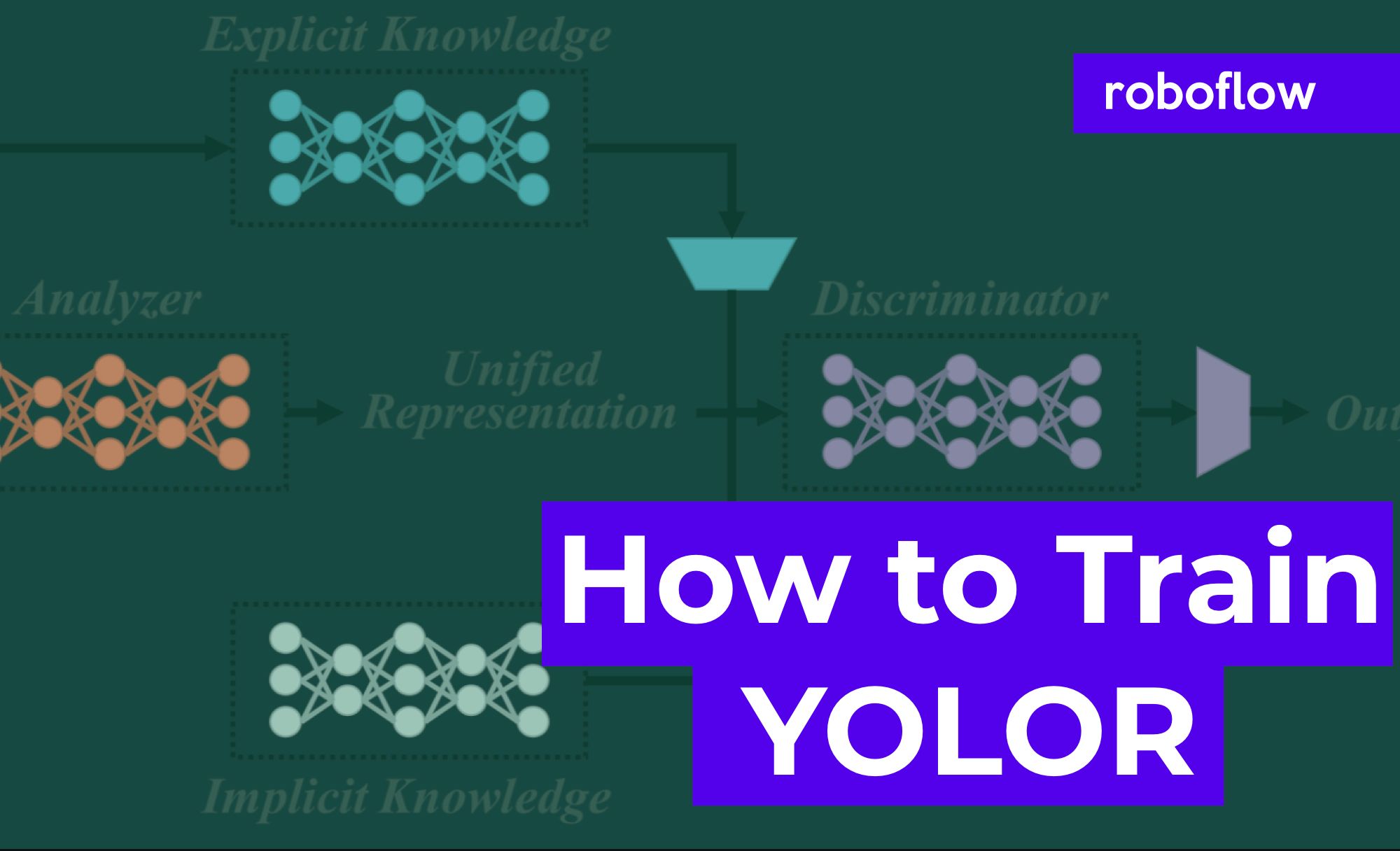 The YOLO family recently got a new champion. YOLOR: You Only Learn One Representation. In this post, we will walk through how you can train YOLOR to recognize object detection data for your custom use case.

We use a public blood cells object detection dataset for the purpose of this tutorial. However, you can import your own data into Roboflow and export it to train this model to fit your own needs. The YOLOR notebook used for this tutorial can be downloaded here.

Thanks to Wong Kin-Yiu for publishing the underlying repository that formed the foundation of our notebook.

In this guide, we take the following steps:

YOLOR (You Only Learn One Representation) is a model that uses the YOLO model architecture. YOLOR trains an implicit knowledge network using COCO data and combines this with explicit knowledge, both used during the inference stage to make a prediction about what is in an image.

YOLOR is the latest evolution of YOLO models, and you've probably heard of YOLOv3, YOLOv4, and YOLOv5. Perhaps you've even also heard of Scaled-YOLOv4 and PP-YOLO and PP-YOLOv2. All of which are great content should you choose to dive into the YOLO-verse.

Wong Kin-Yiu has previously made impacts in computer vision research with his CSP-Net and Scaled-YOLOv4. CSP-Net implemented hyper-efficient convolutional layers to speed up YOLO detection speed with little impact on accuracy. Scaled-YOLOv4 took these concepts and applied them to a family of state of the art detectors.

The pattern in AI training today is to first pre-train your network on a generic task over a large dataset corpus, and then collect a domain-specific dataset to fine-tune your model to. During this pre-train/fine-tune process, the same set of model weights are edited. YOLOR pre-trains an implicit knowledge network with all of the tasks present in the COCO dataset, namely object detection, instance segmentation, panoptic segmentation, keypoint detection, stuff segmentation, image caption, multi-label image classification, and long tail object recognition.

This novel approach propels YOLOR to the state-of-the-art for object detection in the speed/accuracy tradeoff landscape.

For more on these exciting new breakthroughs check out the YOLOR paper.

Alright let's dive in and apply YOLOR to our own dataset. To the notebook.

To setup our development environment, we will first clone the base YOLOR repository and download the necessary requirements:

We will then install Mish CUDA to be able to use the Mish activation:

We will also install PyTorch wavelelts to be able to use the DWT downsampling module:

Before, we get started, you will want to create a Roboflow account. We will be using this blood cells dataset but you are welcome to use any dataset whether it be your own dataset loaded into Roboflow or another public dataset.

Using Your Own Data

Note: the public dataset has images that are already labeled. If you do not have labeled images you can easily label in Roboflow. This is a pre-requisite to training your custom object detector.

For this notebook, we will want to use the preprocessed version of these images with the size of 416 x 416. Click on that version of the dataset:

You will be led to a pop-up and will then want to download this as the YOLOv5 PyTorch dataset format. Select "show download code" and continue:

You will then want to get the Jupyter Notebook command generated and replace this line in the notebook with your new command:

YOLOR comes with some pre-trained weights that we can have our model train off of. We can download these weights using the shell script provided:

Note that both implicit and explicit weights of the network are downloaded.

And run the training command:

Now that we have completed training, we can evaluate how well the training procedure performed by visualizing the logs in runs folder via Tensorboard:

We can also simply plot the the results directly in Colab:

During the training process, YOLOR applies augmentations to the images. We can visualize original images as well as augmented images:

Now we take our trained model and conduct an inference on test images from when we downloaded our dataset from Roboflow. All weights from the training process can be found in the  weights/.

To kick off inference, we run the command with the following parameters:

To run the inference:

Now that we have created our YOLOR object detector, it might be a good idea to export the weights out of Colab for use on a different project. To do so we import a Google Drive module and send them out:

Your YOLOR model is now trained on a custom dataset, ready to be deployed to wherever your model is needed.

YOLOR is an incredibly powerful, state-of-the-art object detection model. In this tutorial we covered how to:

Now you have the knowledge you need to use YOLOR in your computer vision tasks.

Is YOLOR faster than YOLOv4?

YOLOR is around 88% faster than Scaled-YOLOv4 as measured by V100 batch 1 latency, while attaining a similar level of performance.

YOLOR achieves a 3.8% mAP increase over PP-YOLOv2 when benchmarked against the MS COCO dataset.