ELI5 CLIP: A Beginner's Guide to the CLIP Model 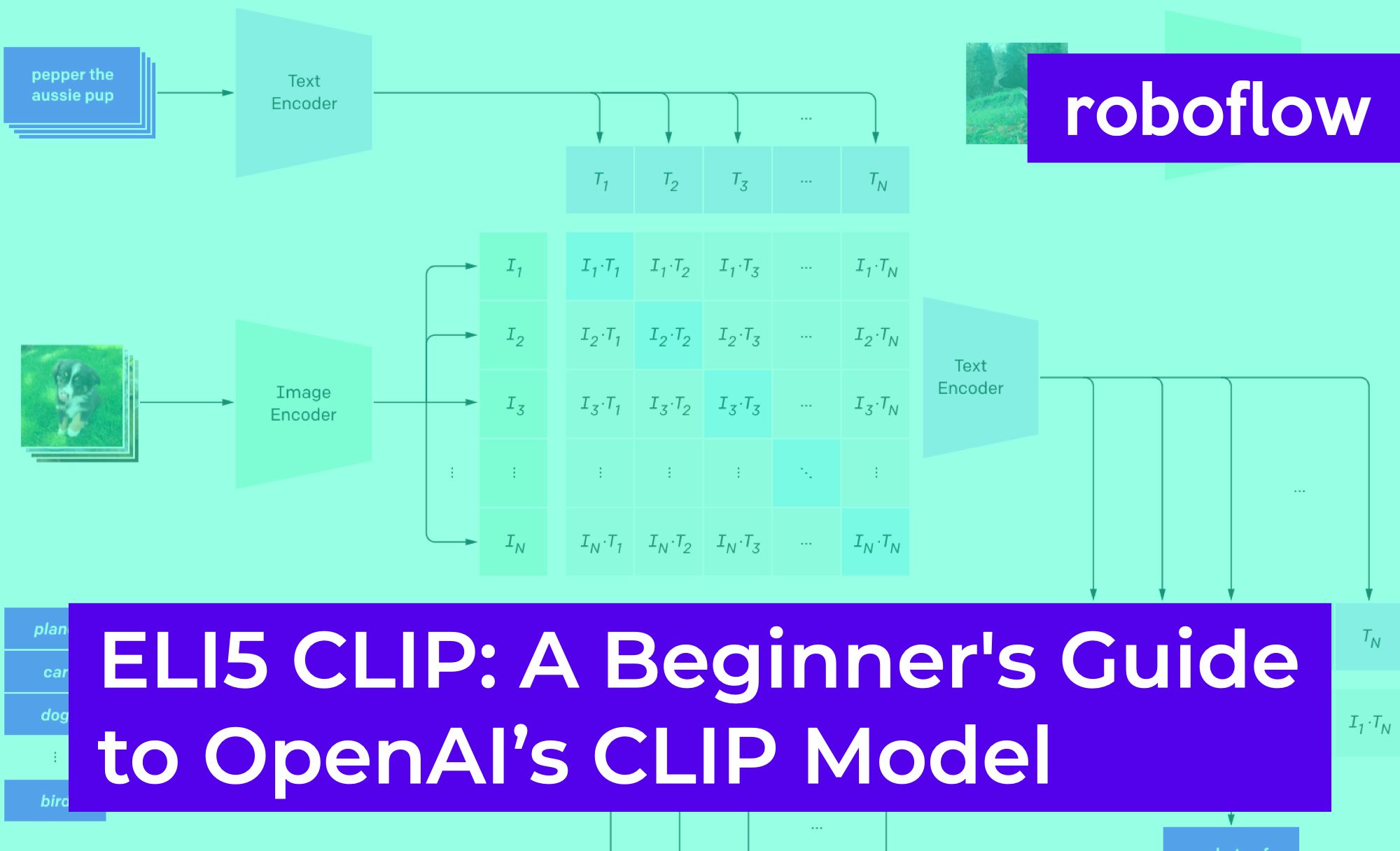 You may have heard about OpenAI's CLIP model. If you looked it up, you read that CLIP stands for "Contrastive Language-Image Pre-training." That doesn't immediately make much sense to me, so I read the paper where they develop the CLIP model – and the corresponding blog post.

I'm here to break CLIP down for you in a – hopefully – accessible and fun read! In this post, I'll cover:

CLIP is the first multimodal (in this case, vision and text) model tackling computer vision and was recently released by OpenAI on January 5, 2021. From the OpenAI CLIP repository, "CLIP (Contrastive Language-Image Pre-Training) is a neural network trained on a variety of (image, text) pairs. It can be instructed in natural language to predict the most relevant text snippet, given an image, without directly optimizing for the task, similarly to the zero-shot capabilities of GPT-2 and 3."

Depending on your background, this may make sense -- but there's a lot in here that may be unfamiliar to you. Let's unpack it.

To put this all together, the CLIP model is:

When I wrote my Introduction to Computer Vision post, I described computer vision as "the ability for a computer to see and understand what it sees in manner similar to humans."

When I've taught natural language processing, I described NLP in a similar way: "the ability for a computer to understand language in manner similar to humans."

It's not just a bridge between computer vision and natural language processing -- it's a very powerful bridge between the two that has a lot of flexibility and a lot of applications.

How does CLIP work?

In order for images and text to be connected to one another, they must both be embedded. You've worked with embeddings before, even if you haven't thought of it that way. Let's go through an example. Suppose you have one cat and two dogs. You could represent that as a dot on a graph, like below:

It may not seem very exciting, but we just embedded that information on the X-Y grid that you probably learned about in middle school (formally called Euclidean space). You could also embed your friends' pet information on the same graph and/or you could have chosen plenty of different ways to represent that information (e.g. put dogs before cats, or add a third dimension for raccoons).

Whenever you fit a supervised learning model, you have to find some way to measure the "goodness" or the "badness" of that model – the goal is to fit a model that is as "most good" and "least bad" as possible.

The CLIP model is no different: the text encoder and image encoder are fit to maximize goodness and minimize badness.

So, how do we measure "goodness" and "badness?"

The exact same thing will happen for the images: each image will go into the image encoder and the output for each image will also be a series of numbers. The picture of, presumably Pepper the Aussie pup, will come out like (0.05, 0.25, 0.7).

"Goodness" of our model

There is a convenient way to calculate the similarity between two series of numbers: the cosine similarity. We won't get into the inner workings of that formula here, but rest assured that it's a tried and true method of seeing how similar two vectors, or series of numbers, are. It's how we score submissions to our paint.wtf game, shown below.

In the pre-training phase image above, the light blue squares represent where the text and image coincide. For example, T1 is the embedded representation of the first text; I1 is the embedded representation of the first image. We want the cosine similarity for I1 and T1 to be as high as possible. We want the same for I2 and T2, and so on for all of the light blue squares. The higher these cosine similarities are, the more "goodness" our model has!

"Badness" of our model

At the same time as wanting to maximize the cosine similarity for each of those blue squares, there are a lot of grey squares that indicate where the text and image don't align. For example, T1 is the text "pepper the aussie pup" but perhaps I2 is an image of a raccoon.

Cute though this raccoon is, we want the cosine similarity between this image (I2) and the text pepper the aussie pup to be pretty small, because this isn't Pepper the Aussie pup!

How do the text and image encoders get fit?

Why is CLIP cool?

With this bridge between computer vision and natural language processing, CLIP has a ton of advantages and cool applications. We'll focus on the applications, but a few advantages to call out:

Some of the uses of CLIP so far:

We hope you'll check out some of the above – or create your own! We've got a CLIP tutorial for you to follow. If you do something with it, let us know so we can add it to the above list!

It's important to note that CLIP is a bridge between computer vision and natural language processing. CLIP is not the only bridge between them. You could build those text and image encoders very differently or find other ways of connecting the two. However, CLIP has so far been an exceptionally innovative technique that has promoted significant additional innovation.

We're eager to see what you build with CLIP and to see the advancements that are built on top of it!

END_OF_DOCUMENT_TOKEN_TO_BE_REPLACED

Getting Started with Roboflow