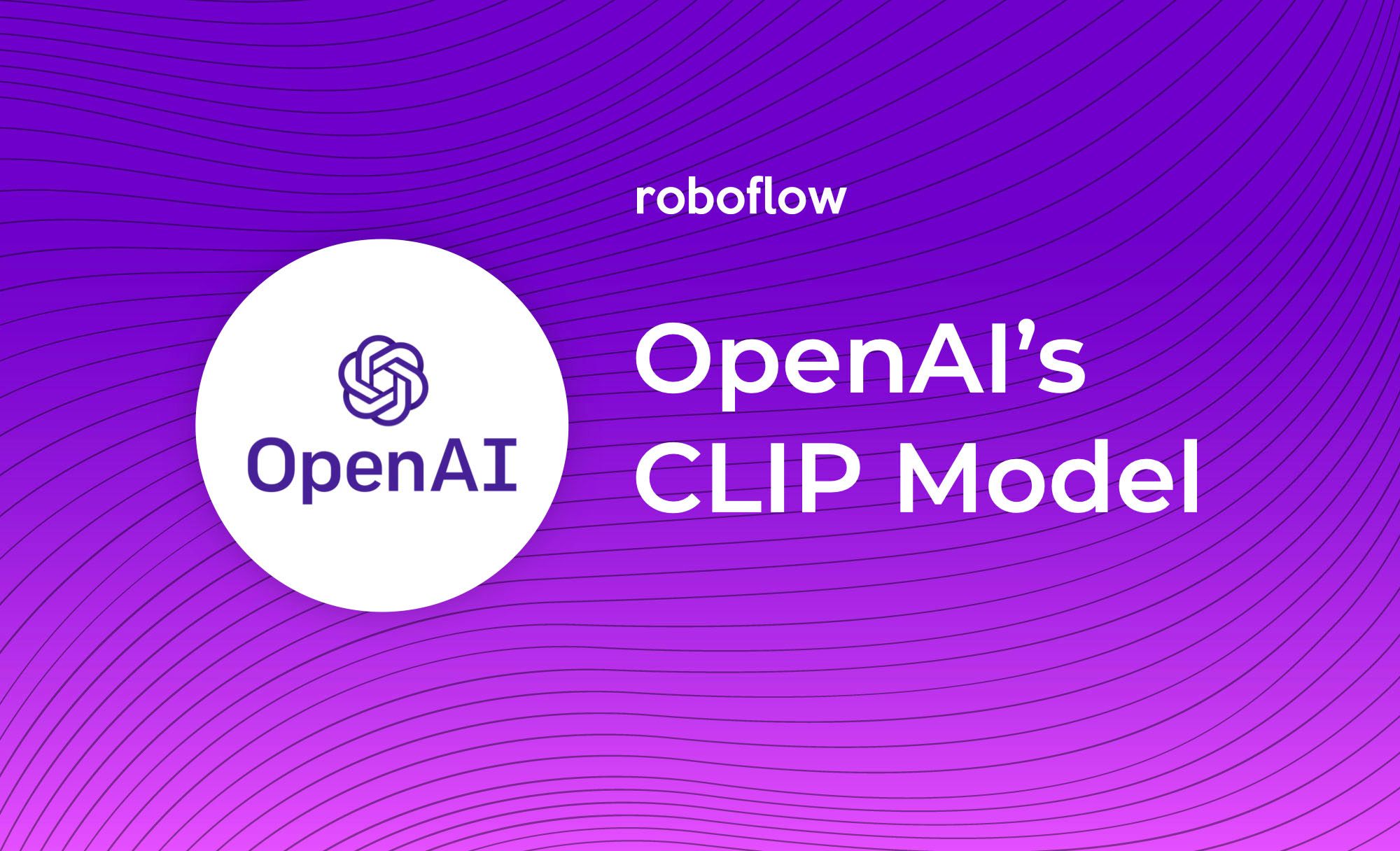 CLIP is a gigantic leap forward, bringing many of the recent developments from the realm of natural language processing into the mainstream of computer vision: unsupervised learning, transformers, and multimodality to name a few. The burst of innovation it has inspired shows its versatility.

Cut to the chase and jump straight to the tutorial to start using OpenAI's CLIP model to do zero-shot image classification!

And this is likely just the beginning. There has been scuttlebutt recently about the coming age of "foundation models" in artificial intelligence that will underpin the state of the art across many different problems in AI; I think CLIP is going to turn out to be the bedrock model for computer vision.

In this post, we aim to catalog the continually expanding use-cases for CLIP; we will update it periodically.

In a nutshell, CLIP is a multimodal model that combines knowledge of English-language concepts with semantic knowledge of images.

It can just as easily distinguish between an image of a "cat" and a "dog" as it can between "an illustration of Deadpool pretending to be a bunny rabbit" and "an underwater scene in the style of Vincent Van Gogh" (even though it has definitely never seen those things in its training data). This is because of its generalized knowledge of what those English phrases mean and what those pixels represent.

This is in contrast to traditional computer vision models which disregard the context of their labels (in other words, a "normal" image classifier works just as well if your labels are "cat" and "dog" or "foo" and "bar"; behind the scenes it just converts them into a numeric identifier with no particular meaning).

Imagine you're given a filing cabinet and 100,000 documents. Your job is to put them each into the correct folder out of the 1,000 folders in the cabinet. At the end of the day your boss will judge your work.

Unfortunately, you're illiterate. You start off doing no better than random chance. But, one day you realize that some of the documents are crisp and white and some are tattered and yellowed. You decide to sort the documents by color and split them evenly between the folders. Your boss  is pleased and gives you slightly better marks that day. Day by day you try to discover new things that are different about the files: some are long and some are short. Some have photos and some do not. Some are paper-clipped and some are stapled.

Then, one day, after years and years of tirelessly deciphering this enigma, trying different combinations of folders and ways of dividing the documents, improving your performance bit by bit, your boss introduces you to your new coworker. You furrow your brow trying to figure out how you're going to train her to execute on your delicate and complicated system.

But, to your surprise, on her very first day, her performance exceeds yours! It turns out your new coworker is CLIP and she knows how to read. Instead of having to guess what the folders should contain she simply looks at their labels. And instead of discovering clues about the documents bit by bit, she already has prior knowledge of what those indecipherable glyphs represent.

In real world tasks, the "glyphs" are actually patterns of pixels (features) representing abstractions like colors, shapes, textures, and patterns (and even concepts like people and locations).

If you're interested in learning more about what CLIP is and how it works, check out our CLIP 101 post.

One of the neatest aspects of CLIP is how versatile it is. When introduced by OpenAI they noted two use-cases: image classification and image generation. But in the 9 months since its release it has been used for a far wider variety of tasks.

OpenAI originally evaluated CLIP as a zero-shot image classifier. They compared it against traditional supervised machine learning models and it performed nearly on par with them without having to be trained on any specific dataset.

One challenge with traditional approaches to image classification is that you need lots of training examples that closely resemble the distribution of the images it will see in the wild. Because of this, CLIP does better on this task the less training data there is available.

To try CLIP for image classification, follow our CLIP tutorial. If you're having trouble getting good results, read our tips on prompt engineering.

DALL-E was developed by OpenAI in tandem with CLIP. It's a generative model that can produce images based on a textual description; CLIP was used to evaluate its efficacy.

The DALL-E model has still not been released publicly, but CLIP has been behind a burgeoning AI generated art scene. It is used to "steer" a GAN (generative adversarial network) towards a desired output. The most commonly used model is Taming Transformers' CLIP+VQGAN which we dove deep on here.

One extension of image classification is content moderation. If you ask it in the right way, CLIP can filter out graphic or NSFW images out of the box. We demonstrated content moderation with CLIP in a post here.

Because CLIP doesn't need to be trained on specific phrases, it's perfectly suited for searching large catalogs of images. It doesn't need images to be tagged and can do natural language search.

Yurij Mikhalevich has already created an AI-powered command image line search tool called rclip. It wouldn't surprise me if CLIP spawns a Google Image Search competitor in the near future.

Apple's Neuralhash semantic image similarity algorithm has been in the news a lot recently for how they're applying it to scanning user devices for CSAM. We showed how you can use CLIP to find similar images in the exact same way Apple's Neuralhash works.

The applications of being able to find similar images go far beyond scanning for illegal content, though. It could be used to search for copyright violations, create a clone of Tineye, or an advanced photo library de-duplicator.

It's not just factual representations that are encoded in CLIP's memory. It also knows about qualitative concepts as well (as we learned from the Unreal engine trick).

We used this to create a CLIP judged Pictionary-style game, but you could also use it to create a camera app that "scores" users' photos by "searching" for phrases like "award winning photograph" or "professional selfie of a model" to help users decide which images to keep and which ones to trash, for example.

As an extension of image similarity, we've used CLIP to track objects across frames in a video. It uses an object detection model to find items of interest then crops the image and uses CLIP to determine if two detected objects are the same or difference instance of that object across different frames of a video.

The CLIPort model combines CLIP with another model to allow robots to perform abstract tasks like folding laundry or sorting cubes without having to be given explicit instructions for how to accomplish the objective.

With the CLIP prefix captioning repo, the feature vectors from CLIP have been wired into GPT-2 to output an English description for a given image.

In a new paper, called Inverse Problems Leveraging Pre-Trained Contrastive Representations, researchers have shown how CLIP can be used to interpret extremely distorted or corrupted images.

CLIP will be used in many more creative ways in the future. We're working on a CLIP API to make it easier to try building these types of projects. If you'd like early access, please reach out.

Unfortunately, for many hyper-specific use-cases (eg examining the output of microchip lithography) or identifying things invented since CLIP was trained in 2020 (for example, the unique characteristics of CLIP+VQGAN creations), CLIP isn't capable of performing well out of the box for all problems. It should be possible to extend CLIP (essentially using it as a fantastic checkpoint for transfer learning) with additional data.

In much the same way we used CLIP to do object tracking, it's conceivable that you could use it for object detection as well. One naive way of doing this would be to feed every candidate anchor box into CLIP and determine which ones are the closest matches to your objects of interest.

If you can classify images, it should be doable to classify frames of videos. In this way you could automatically split videos into scenes and create search indexes. Imagine searching YouTube for your company's logo and magically finding all of the places where someone happened to have used your product.

Let us know if you have seen or used CLIP in other novel and interesting ways! And if you want to try CLIP yourself, try our tutorial or convert and object detection dataset into a classification dataset for use with CLIP.

END_OF_DOCUMENT_TOKEN_TO_BE_REPLACED

How to Train YOLOv5-Classification on a Custom Dataset